What Makes A Competent Witness In A Criminal Case? 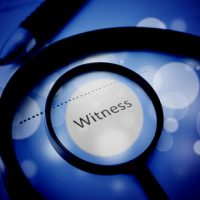 When an individual is facing criminal charges, the court cannot consider just any evidence. The court can only consider competent evidence in a criminal trial. Competent evidence is that which is legally admissible, relevant, and material. Competent evidence is evidence that a reasonable individual might acknowledge as adequate to support a conclusion. Even the witnesses the prosecution presents at trial must be competent. The evidence of witnesses lies at the heart of the criminal justice system. Even direct and scientific evidence such as video, DNA, blood pattern analysis, and fingerprints may heavily rely on human analysis. Often, juries and judges decide based on the evidence of witnesses when there is a dispute about what occurred. Thus, such evidence must be competent. But what makes a competent witness in a criminal case? We discuss this below.

In New York, every adult is presumed to be a competent witness unless evidence shows otherwise. The New York State Constitution states that a person cannot be rendered incompetent because of their opinions on matters of religious belief. As long as an adult can provide testimony about issues relevant to a criminal case and understand and appreciate the nature and obligation of an oath, they can be a witness.

When Can an Adult Be Considered an Incompetent Witness?

So, when can an adult be considered an incompetent witness? According to Criminal Procedure Law, an individual cannot be a witness if the court finds that, due to mental disease or defect, the individual does not possess enough intelligence or capacity to justify the reception of their evidence.

Can Children Be Competent Witnesses?

There are strict rules that apply to witnesses below the age of nine. According to Criminal Procedure Law, a child under the age of nine cannot testify under oath unless it has been determined that they understand what an oath is. So how does the court determine that a child understands an oath? A “swearability hearing” is usually conducted. In this hearing, the judge determines the child’s competency to testify. Additionally, to be considered a competent witness, a child must understand the importance of being truthful and the consequences of telling lies.

If you need help with a criminal case, contact our skilled and dedicated NYC criminal defense attorney, Mark I. Cohen, at 212-732-0002.