Have a Former New York Prosecutor Fighting for Your Rights 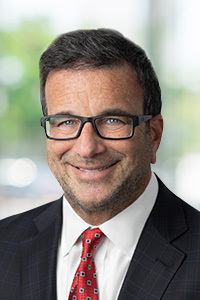 Thereafter, Mr. Cohen was an associate attorney with Mound Cotton & Wollan, a prestigious litigation firm in Manhattan where he handled a variety of complex fraud matters and defended international corporations and criminal defendants.

In late 1990, Mr. Cohen left Mound Cotton & Wollan to start the Law Office of Mark I. Cohen, his own Criminal Defense practice in Manhattan. By 1995, Mr. Cohen became a member of Cohen, Frankel & Ruggiero, LLP, a boutique Criminal Defense and Real Estate firm, and since then has been in partnership with Peter M. Frankel, Esq. and Louis J. Ruggiero, Esq.

Since 1990 Mr. Cohen has maintained offices at 20 Vesey Street outside the World Trade Center in Manhattan’s financial district. He handles criminal and corporate investigations and criminal litigation in the United States District Courts and New York State Courts. He also represents clients in administrative litigation proceedings against a variety of United States, New York State and New York City agencies. Mr. Cohen is fluent in Spanish.