What Is A Mistrial And What Are Some Of The Common Grounds For A Mistrial? 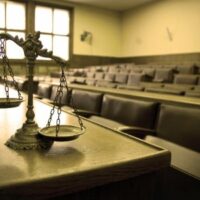 What Is a Mistrial?

In criminal law, a mistrial is a trial that is declared null and void before a judge or jury renders a verdict. When a mistrial occurs, the preceding proceedings become null and void. Generally, previous testimonies or findings presented in a previous trial are not considered during a new trial. A new trial always starts from the beginning.

Either side (i.e., the prosecuting or defense side) can make a motion of a mistrial during a trial. When a judge receives a motion for a mistrial, they have the right to either grant the motion and halt the trial or deny the motion and allow the trial to proceed.

It is important to note that just because a defendant is not convicted in the event of a mistrial doesn’t mean they are acquitted. A defendant is only acquitted when a judge or jury renders a not guilty verdict.

The following are some of the common reasons for mistrials.

An Important Figure in the Trial Becomes Unavailable

If a juror or attorney becomes unavailable due to death, illness, or any other cause, the judge might declare a mistrial. A recent example of a trial that was declared a mistrial after a key figure became unavailable is the trial of a New York man accused of sexual abuse. The sex abuse case ended in a mistrial after the defense lawyer developed coronavirus symptoms.

When a juror engages in misconduct during a trial, a judge might end up declaring a mistrial. Jurors need to conduct themselves in a particular manner during trials. For example, members of the jury are not supposed to speak to people about the case. If a juror is found guilty of talking about a case with a person or people they shouldn’t be talking to about the case, the judge might declare a mistrial.

A Jury Was Not Properly Drawn

If, during a trial, a judge discovers an impropriety in the drawing of jurors, they might declare a mistrial. Generally, attorneys and judges select jurors through a process known as the voir dire process. Often, the judge and attorneys aim to have jurors with no knowledge of the case in question.

If you stand accused of committing a crime and are about to go to trial, you need to reach out to a skilled defense attorney who can skillfully defend you. To receive help with your criminal case, contact experienced NYC criminal attorney Mark I. Cohen, Esq., at 212-732-0002 today.