What Happens When A Witness Is Not Available To Testify In A Criminal Trial? 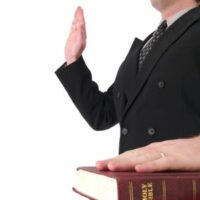 In the United States of America, for a defendant to be convicted of a crime, the prosecutor is required to prove that they (the defendant) are guilty beyond a reasonable doubt. Often, in criminal cases, the strongest evidence of guilt that the prosecution can use is the direct testimony of a witness. Usually, the jury will hear evidence from witnesses who present themselves in court and can be cross-examined by the defense side. But, what happens if a witness is not available to testify at trial? Can the witness’s previous statement be admitted into evidence? Read on to find out.

Can a Witness’s Out-of-Court Statement Be Admitted Into Evidence?

Generally, criminal courts keep witnesses’ out-of-court statements out of court and require that witnesses present themselves in court. One of the reasons that judges and juries require that witnesses present themselves in court is because people accused of committing a crime have the right to cross-examine witnesses who testify against them. The Sixth Amendment gives defendants the right to confront witnesses who testify against them. When a witness is not in court, it means a defendant cannot exercise their right to cross-examine the witness. Additionally, when juries do not hear challenges to testimonies, they can be misled. However, there are exceptions to this constitutional rule.

The hearsay rule is another reason criminal courts usually exclude out-of-court witness statements. The hearsay rule is a law that prohibits out-of-court statements from being offered as evidence in court. Rules of evidence exclude hearsay because of the inability of the other party to cross-examine the person who made the statement. Apart from that, hearsay is excluded because such statements are generally not trustworthy as they might not have been made under oath. However, this rule, too, has exceptions.

After it is established that the speaker is legally “unavailable,” the judge will then decide if the offered testimony fits within one of the exceptions to the confrontation clause or hearsay rule. As it pertains to the confrontation clause, a judge might admit an out-of-court statement from an unavailable witness offered against a defendant if they determine that the statement was made in circumstances that point to its truthfulness. And, as it pertains to the hearsay rule, the following are some of the federal exceptions;

If you have any questions about witness testimony or evidence or need help with your criminal case, contact the skilled and dedicated NYC criminal defense attorney Mark I. Cohen, Esq. at 212-732-0002.