What Are Your Responsibilities In Removal Proceedings? 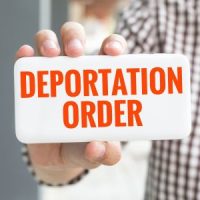 Being deported is not something any immigrant expects. But the reality is that many immigrants are deported every year from the United States of America. According to Pew Research Center, in 2018, 337,000 immigrants were deported from the United States. Of the 337,000 immigrants deported in 2018, 44% had criminal convictions. Apart from criminal convictions, other common reasons for deportation include clerical errors and failing to file for an extension on a green card.

Understand Your Responsibilities if You Are in Removal Proceedings

It is crucial that you attend your scheduled court hearings. Failure to attend court hearings will most likely lead to an order of removal in your absence and the loss of any bond money you paid. You will also most likely be arrested.

There are several deadlines you need to meet when in removal proceedings. For example, you may need to meet a filing deadline. You may also need to present evidence to the court by a particular date. Ensure you meet all the deadlines given by the court. If you fail to meet deadlines, the court might conclude that you have deserted your case. You might be deported if you miss deadlines.

Reporting to a Deportation Officer

If you are in removal proceedings and need help from an experienced attorney, contact our NYC immigration attorney, Mark I. Cohen, Esq.