Understanding Some Basics About Hearsay Evidence 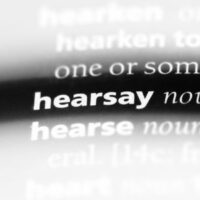 Generally, if any of the above evidence is to be admitted in a criminal court, it must be relevant, material, and competent.

When it comes to testimonial evidence, one type of evidence that confuses many is the evidence known as “hearsay evidence.” In an attempt to help you grasp the concept of hearsay, we will discuss some basic information about hearsay evidence in this article.

Unfortunately, many people have heard of the term hearsay, but not many understand the meaning of this word. According to New York law, hearsay is an out-of-court statement offered in evidence to prove the truth of the matter asserted in the statement. Hearsay may be written, oral, or non-verbal.

Generally speaking, in the state of New York, hearsay evidence is not admissible. However, it is important for you to keep in mind that there are exceptions to the hearsay exclusion. According to the law, hearsay is admissible if it falls within an exception to the hearsay rule.

Why Is Hearsay Not Admissible Evidence?

Some Common Exceptions to the Hearsay Exclusion

As mentioned earlier, exceptions to the hearsay exclusion exist. For instance, you can admit a statement into evidence if the purpose is not to prove the truth of the out-of-court statement but rather to prove something that was heard or seen directly. Generally, such a statement is not considered hearsay.

Another exception to the hearsay exclusion is the hearsay exception for an “excited utterance.” Such an utterance may be admissible in a criminal court because courts believe it is hard for an individual to make up false statements when under the excitement or stress of a startling event.

Other exceptions to the hearsay exclusion include present sense impressions and dying declarations.

Get Legal Help From an NYC Criminal Defense Attorney

If you are currently facing a criminal accusation and have questions about hearsay evidence or any other type of evidence, contact Mark I. Cohen, an experienced NYC criminal defense attorney, to get the answers you need.