The Crackdown On Illegal Reentry: Who Is & Is Not Prosecuted? 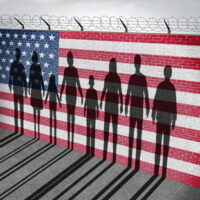 According to the data collected, the current administration has cracked down on thousands of people and charged them with the federal crime of illegal reentry. However, the government has not prioritized prosecuting employers; some of whom arguably lure of those making their way back into the United States.

Specifically, just from March of last year through March of this year, more than 110,000 people were prosecuted for illegal reentry and just 11 employers faced criminal charges for hiring those who reentered. In fact, not only are a few employers prosecuted, but even those who were did not receive any actual sentences: According to the data, of the 11 people convicted during this 12 month period, only three actually served prison time.

The Path Of Least Resistance

Some of the tactics used to hunt down in charge defendants with illegal reentry have included increasing payroll audits of companies and conducting workplace rates.

Still, it is arguably difficult to prove it an employer knowingly hired someone who is not authorized to work, as a number of employers do not question documents and very few states actually require them to do so. According to reports, the employers that are most likely face prosecution are immigrants themselves who own small businesses.

As a result of this strong crackdown, an already-burdened federal court system has become even more overwhelmed, resulting in billions of dollars in extra detention costs alone. Illegal reentry felony charges can carry sentences that are several years or longer, depending upon whether there are other convictions on record.

Due Process & Other Constitutional Concerns

Traditionally, prosecutors supposedly focused more on felony charges against those who re-enter with criminal records or a series of illegal reentry, but that appears to have changed: According to reports, some programs have fast-tracked illegal reentry cases by encouraging quick plea deals to misdemeanor illegal reentry charges with less jail time than the reentry felony version. However, this is arguably unconstitutional, as it moves cases through the system so quickly that defense attorneys cannot have an adequate meeting with their clients.

Indeed, perhaps of most concern are the many due process rights that have arguably been compromised and outright violated for those charged with these crimes. In particular, ineffective assistance of counsel at deportation hearings (as well as preventing clients to have access to attorneys) is a violation of the Fifth Amendment. In the context of a deportation hearing, if a defendant can demonstrate that counsel was ineffective and the error interfered with the fundamental fairness of the hearing such that it affected the outcome of the proceedings, the hearing could be found to violate due process.

Mark I. Cohen is an experienced NYC federal illegal reentry attorney who has represented a number of defendants charged with illegal reentry. If you have concerns about this federal charge, contact our office today.