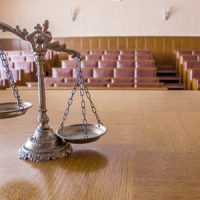 Ways a Criminal Case Can Go to a Sentencing Hearing

If a guilty plea is negotiated with the prosecuting attorney, it might lead to a reduced sentence. However, if, after bargaining, there isn’t an agreement on a sentence, the judge might order a sentencing hearing and make a decision regarding the sentence for the guilty plea during this hearing.

What Happens During Sentencing Hearings?

At this hearing, the defense and prosecution try to convince the judge to give the defendant a reduced or increased sentence. Each side is allowed to speak to the judge about issues such as past criminal history and the effect of the crime on the victim.

During sentencing hearings, the prosecution side is the first to make its statements. Usually, the prosecution will try and convince the judge to impose a particular punishment, and the defense side will argue why the judge should impose a less severe sentence.

Preparing for a Sentencing Hearing

If you need help with your criminal case, contact the qualified NYC criminal defense attorney, Mark I. Cohen, at 212-732-0002.