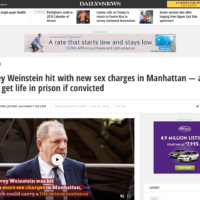 Mark I. Cohen Esq. was quoted in an article about the high-profile Harvey Weinstein Case

New York, NY- July 21, 2018- The Harvey Weinstein case is a high-profile case taking place in New York right now. Mr. Weinstein is accused and facing multiple charges revolving around sexual assault. Many of his victims are high profile actresses and the media has been following the case closely.

On July 2, 2018, the New York Daily News published an article about the case quoting from both the defense attorney and the Manhattan district attorney. The article delineated that Mr. Weinstein is being charged under a pattern sex offender statute and that he is accused of committing multiple illegal sexual acts.

Esteemed New York criminal defense attorney, Mark I. Cohen, was quoted in the article sharing his expertise regarding the prosecution’s use of the course of conduct theory that Mr. Weinstein engaged in a pattern of sex-related crimes. Here is his quote from the article:

“Obviously, credibility comes from numbers.” He goes on to state, “You’re essentially going in front of a jury saying this guy, he’s out there. He’s a serial offender. He does this to multiple victims and you have the statute drawn that way” …. “The statute makes the argument for you.”