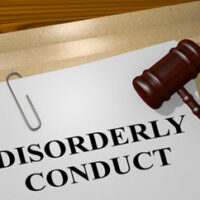 According to New York Penal Law Section 240.20, an individual can be charged with disorderly conduct when;

with intent to cause annoyance or public inconvenience. For instance, if you get into a loud argument with a friend or family member on the streets of an otherwise quiet neighborhood in the early morning, you could be charged with disorderly conduct.